Taken from Chapter 3 of
"Hooping"
An Instructional DVD by Peachysteve

The figure of eight draws a circle on one side of the body, crosses over,
draws another circle and comes back to the start.
When the move is repeated it can be said to have a two beat tempo.
When doing a figure eight pattern with both arms the timing can be synchronous (at the same time)
or asynchronous (one is half a beat after the other).
In the latter the hoops weave past each other, hence the name Two Beat Weave.


Actually the two beat weave is a strange move as it's unbalanced. It feels fine until you learn the 3 beat weave, which is a much more balanced move.
The two beat weave then feels incomplete but it's an essential stepping stone in learning the three beat weave and it's also an important concept.
Many complex swinging moves involve travelling two beat weaves.

If you feel confident with the figure of eight in each hand then the two beat weave is not difficult.
The main difficulty is finding the timing to start off.
You can start with your right or left arm, in these examples I start with my right.

The images below show the same steps but with more focus on the arms than the hoops.

The flatter you can keep the hoops to the vertical plane the smoother your pattern will be. 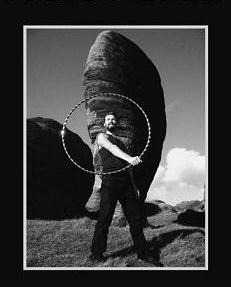 Click Here
to learn how to
Combine Rolls And Swinging